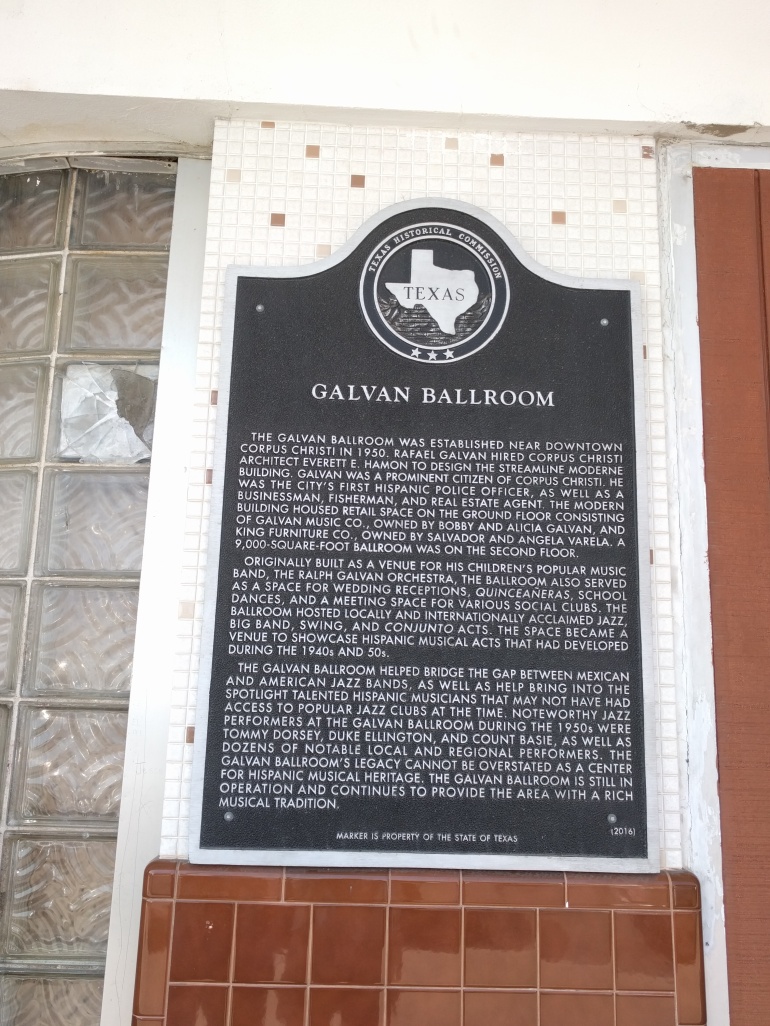 The Galvan Ballroom 1632 Agnes St, Corpus Christi, TX (Nueces County) is no longer an active public dance hall. You can rent it for special occasions, as we found out when we visited.  The ballroom grand opening was March 30, 1950 and was home to the fifteen piece Galvan orchestra, headed by Rafael Galvan and featured his four sons. It was the place to go for big band, jazz and swing music.

We parked across the street and walked over so I could get a photo of the outside. I didn’t know from the research I did before the trip, if the music store had taken over the ballroom floor or not. We planned on going inside and finding a corner to dance if it had been converted to the music store. 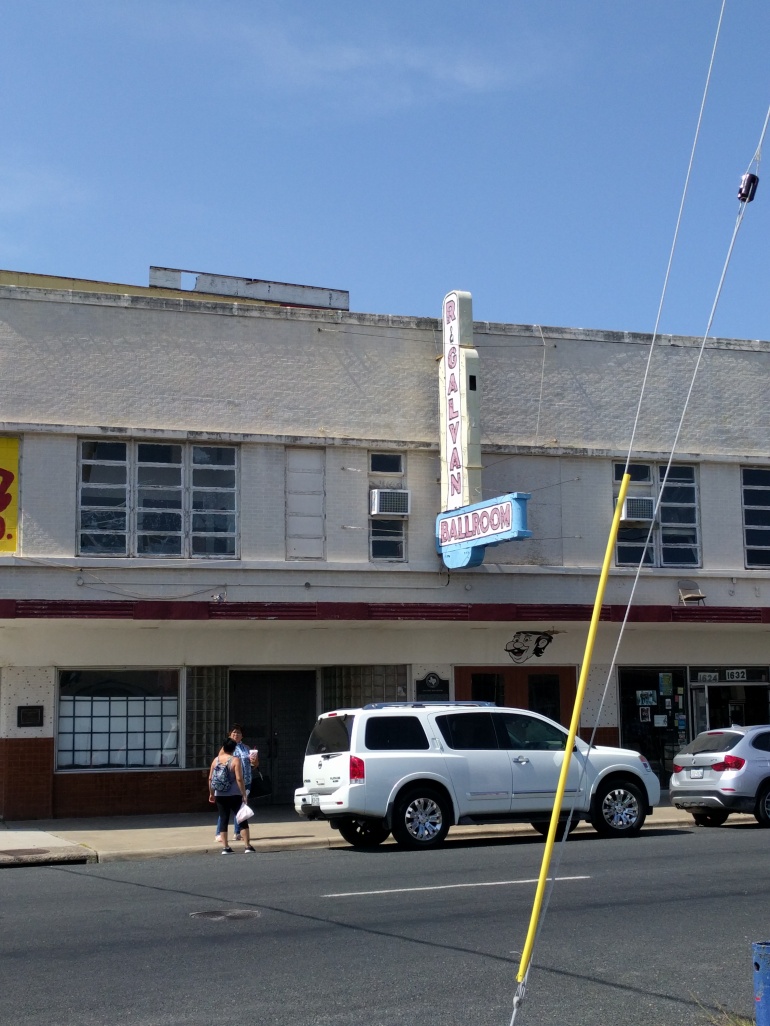 As it happened, there was a double door at the end of the building (shown in the photo behind the people) and an elderly gentleman was just then unlocking and opening the door. We said “Hello” and he said, “You two look like good dancers. Go on upstairs and dance.”  So we did – before he could ask us anything or change his mind!  Up the carpeted stairs and to the right was another door, which opened onto this….. 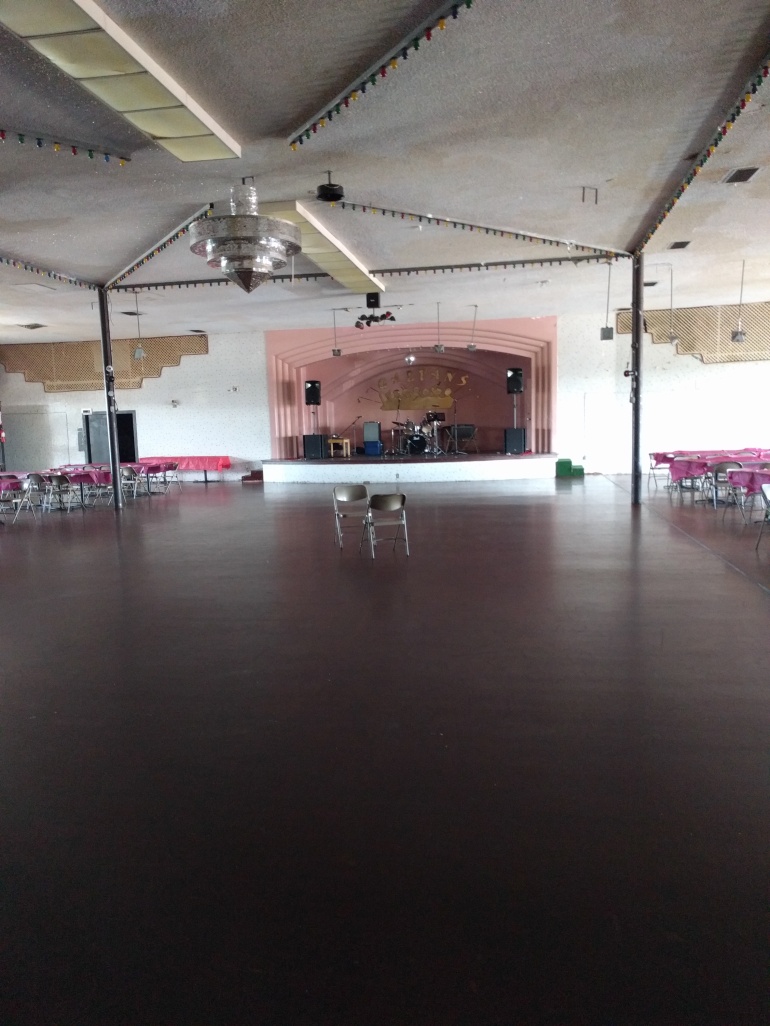 It was a gorgeous floor! We found a song on the iPhone and started dancing.  In the middle of our dance two ladies appeared carrying big bags. They were there to set up for a Quinceanera.  They looked at us funny, but figured we had been granted admission, so they ignored us as they started putting flowers everywhere.

Walking downstairs after dancing, we found the gentleman, Mr. Sammie Galvan himself. He is the last surviving Galvan brother. He told us he was the one in the back on the left. 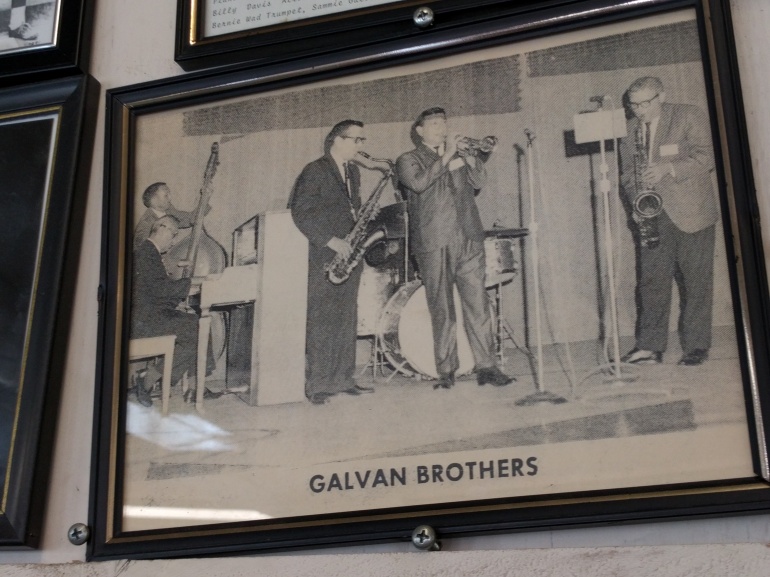 He’s the last on the right here in a photo from 1954 with Duke Ellington.

We had a very enjoyable half hour talking to him about the building, the dance hall and his own history. His (very quiet) wife was sitting at a desk on the other side of the room. As we were talking to him, his granddaughter came in. Mr. Galvan was very proud of her. She’s currently attending college, but was helping out during a break. Her father (Mr. Galvan’s son) is a Federal Judge and her mother is a District Judge.  I teased her and said she couldn’t get away with anything!

We were very sorry we weren’t able to attend one of the big band dances in the Ballroom’s heyday, but grateful we did get a chance to dance when we visited.  Thank You, Mr. Galvan!

Still in Corpus, we tried the dance floor at Whiskey River.